Google Offering Upgraded GMB Profile
Google is offering an ‘upgraded’ GMB profile with Google Guaranteed badge for $50 per month. Google is starting to offer Google Guaranteed certification for a monthly fee, outside of Local Services Ads. It’s positioned as an “upgraded profile” that will include a badge appearing on the profile and which may also appear in the Local Pack.

Search Engine Land asked Google a number of questions about the new program and will update this post when the company responds (update: see below). Below is a promotional screenshot captured by Tom Waddington, who said the new upgraded profile is being promoted within the Google My Business dashboard. 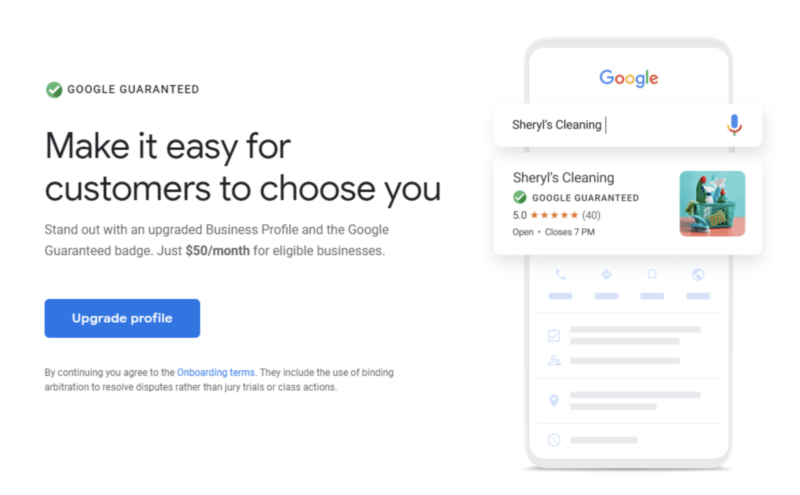 Google Guaranteed was introduced in connection with Local Services Ads to instill greater consumer confidence in the advertised businesses. However, it has also evolved into a distinct program used to certify local businesses for inclusion in Google Home/Assistant search results.

CTR boost?
There’s no public data on any CTR or engagement lift from the presence of a Google Guaranteed badge, but I would speculate that such profiles do and would see higher click-throughs. Below is another screenshot from Tom Waddington showing the Guaranteed badge in a Local Pack. The listing with the badge calls more attention to itself.

Google Guaranteed badge on Profile and in Local Pack 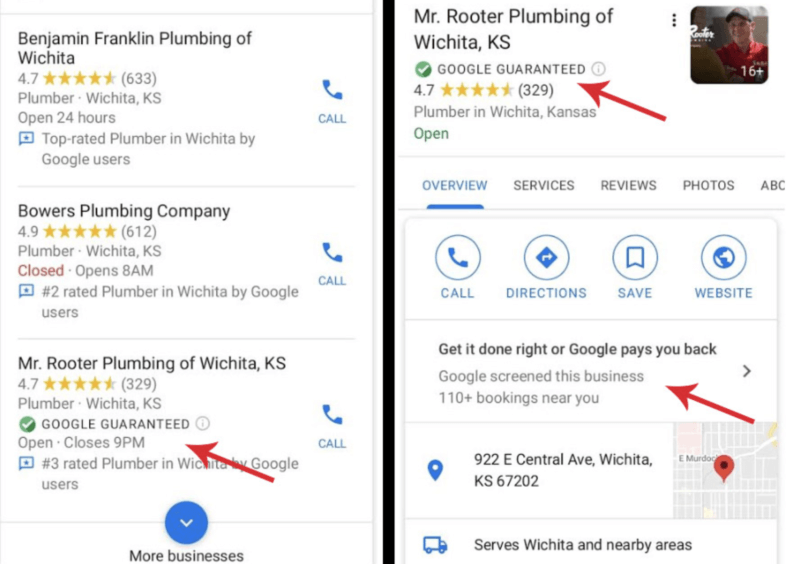 Google’s market opportunity. In April 2019 Google sent out a small business owner survey, that also went to digital agencies. Among other things, it asked about enhanced GMB services and profile upgrades and how much businesses might be willing to pay for them. Verified profiles and Google Guaranteed certification were among the options in the survey.

The Search Engine Land posting adds that subscription fees, for new or enhanced services, we’re on the GMB product roadmap as Google looks for new offerings for small business customers who either are resistant to Ads or churn out of Ads regularly. Google AdWords has had high SMB churn rates historically. Google is also looking for ways to more directly monetize GMB.

The Google Guaranteed badge does that without clawing back and trying to charge for any existing features, which is what the local SEO community was afraid of. CallJoy, one of Google’s first experiments with a subscription model (outside of GSuite) was shuttered. The virtual agent for SMBs, which answered the phone and transcribed calls, was $39 per month.

Yelp offers a number of different paid profile upgrades that can together cost more than $1,000 per year absent discounts or bundled pricing. Such subscription-based revenue has the benefit of lower churn and fewer ROI expectations from business owners.

There are roughly 30 million SMBs in the U.S. according to the Commerce Department. Google hasn’t published any public numbers but let’s assume that the company has the most comprehensive set of business listings online and that there are more than 20 million locations in the database (90% of which are single location businesses). According to a yet-to-be-published analysis of 800,000 business listings from Whitespark, 49% were claimed. That is Google’s “installed base.”

Google: an “experiment.” A Google spokesperson provided the following comment in an email: We’re always testing new ways to improve our experience for our advertisers, merchants and users. This experiment will show the Google Guaranteed badge on the business profile. We don’t have anything additional to announce right now.”